Meaning of the slash ("/") in dialog in Ernst Toller's "Die Wandlung"

I have to translate German playwright Ernst Toller's drama Die Wandlung. In this drama, Toller uses slashes in the dialogues of some characters to separate the sentences, like this: 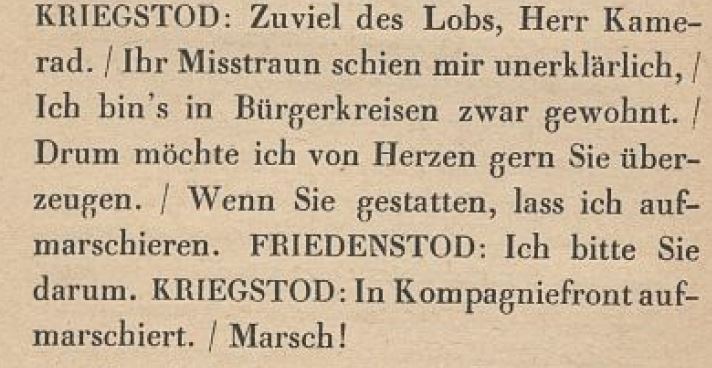 From what I know, the slash is used in literature to separate verses of a poem when written in body text. I have also asked my teacher, a professional translator specialised in literature, and she told me that she has only seen the slash in this context. But in this case there is no poem, there is not even a rhyme, so I don't understand the purpose of this punctuation mark here and I can't translate the text properly. Has anyone ever encountered the slash in a similar context?

Maybe it is something only play-related. Could it have something to do with the way the actors have to act this scene or these characters?

I speak no German and have no knowledge of the play beyond what quarter of an hour on Google has rendered.

From that it is clear that the characters whose speech is broken up with obliques are dead people, skeletons or incarnations of death itself.

It would seem then that the slash marks are to indicate a difference in the manner of the speech from the living to the dead, if you look at Friedrich's final lines, his speech changes from the normal flow of the living to the slash-divided flow of the dead. Perhaps this represents the final transformation of the title, as the character moves from life to death. (or as a bit further reading suggests, from outsider Jew to messianic figure - as I said, I don't know the play).

Given that Ernst Toller was a poet as well as a playwright, it seems reasonable to assume that the lines given to these characters are intended to have a more 'poetical' delivery.

Not the answer you're looking for? Browse other questions tagged german-literature orthography die-wandlung ernst-toller or ask your own question.

5
What are the charactaristics of German Trümmerliteratur?
5
Why does Die Verwandlung have autobiographical aspects?
2
Does the title of "The Neverending Story" have a double meaning?
5
Did Heine write “wo die Blumen sprießen” or “wo die Veilchen sprießen” in Frühlingsbotschaft?
7
Meaning of capitalized nouns in a Lord Byron poem
1
What is the intention and purpose behind the "dash style" book format compared to the "quote style" one?