What's the “Tower of Darkness” in the Rubaiyat referring to?

Stanza 26: (from the English version by FitzGerald)

A Muezzin from the Tower of Darkness cries
"Fools! Your reward is neither Here nor There!"

What's the "Tower of Darkness" referred to?

I'm assuming the tower part is a minaret, but beyond that I have no clue.

TL;DR: FitzGerald made it up. Why? We don't know.

As I expected, the translations of Rubaiyat are all over the place when it comes to sticking to the original text. First, I came across an analysis or FitzGerald's translation, which says the following:

The sense here is presumably one of a disembodied Voice calling from the Great Unknown.

But, this analysis also provides two different translations of the same rubai1, by Edward Heron-Allen:

Some are immersed in contemplation of doctrine and faith,
Others stand stupefied between doubt and certainty,
Suddenly a Muezzin from his lurking place, cries out
“O Fools! The Road is neither here nor there.”

Some people are meditating upon doctrine and faith,
one group are bewildered about doubt and certainty;
suddenly a proclamation emerges from a hiding-place –
‘O ignorant ones, the way is neither that nor this.’

The second translator notes that the muezzin (and, I guess, the tower too) does not appear in the original script. This is backed by the Russian translations that I dug up: out of 16 (!) translations of the same verse, only one (!) mentions a tower.

All and all, the tower appears to be a creation of FitzGerald. The forums I visited so far seem to agree that what FitzGerald did is more of a rendition than a translation.

Here's what Edward Heron-Allen has to say about this verse:

Masterly as is this paraphrase, the original is even more interesting. It runs:

"Some are immersed in contemplation of doctrine and faith
Others stand stupefied between doubt and certainty
Suddenly a Muezzin from his lurking-place cries out:
O Fools! the Road [i.e., the "Mystic Road." or "Way of Salvation"] is neither here nor there."

A curious parallel to this rubai occurs in Baba Tahir (IX. p. 86):

O Man who ne'er has studied Heavenly Lore,
Nor set thy foot within Tavern Doors
Thou knowest not what thou hast escaped or gained;
How shalt thou come among the Elect? Alas!

The poet wishes to conver that if a man has neither the self-denial of ascetism nor the courage of his contrary convictions he is not fit to be admitted among men of decided character.

All things come alike to all: there is one
event to the righteous, and to the wicked;
. . . to him that sacrificeth, and to him that
sacrificeth not: as is the good, so is the
sinner. - Ecclesiastes ix. 2.

Taken from The second edition of Edward FitzGerald's Rubáiyyát of 'Umar Khayyám., edited, with an introduction and notes by Edward Heron-Allen. London, Duckworth, 1908, with minor readability improvements by myself (nothing was excluded).
Found here (open access) - great website with a ton of versions of Rubaiyat, in different languages.

In "Edward FitzGerald's Rubáiyát of Omar Khayyám. With their original Persian sources collated from his own MSS., and literally translated by Edward Heron-Allen.", Heron-Allen provides what he thinks is the inspiration for the rubai in question: 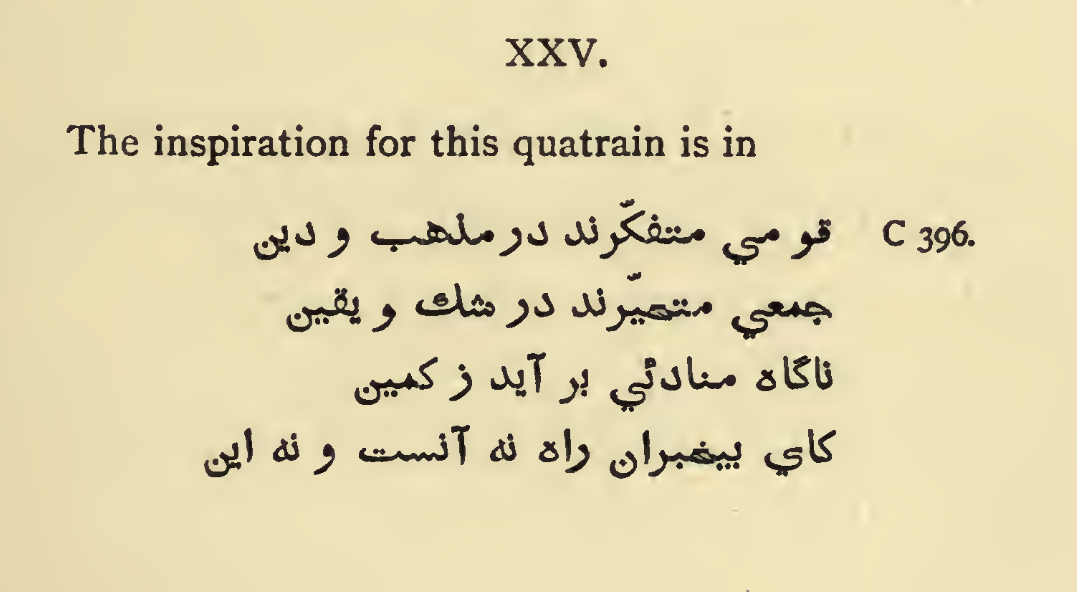 C refers to the Calcutta Manuscript. No. 1548 in the Bengal Asiatic Society's Library at Calcutta, containing 510 ruba'iyat. The original has been lost or stolen, but a copy has been made from the copy made for Edward FitzGerald at the instance of Prof. Cowell.

I was able to find an (allegedly) Persian text of this verse2:

with a more literal translation by Shahriar Shahriari:

Some are thoughtful on their way
Some are doubtful, so they pray
I hear the hidden voice that may
Shout, "Both paths lead astray."

One illustrator depicts said muezzin as a sort of Grim Reaper, with the scythe and stuff. 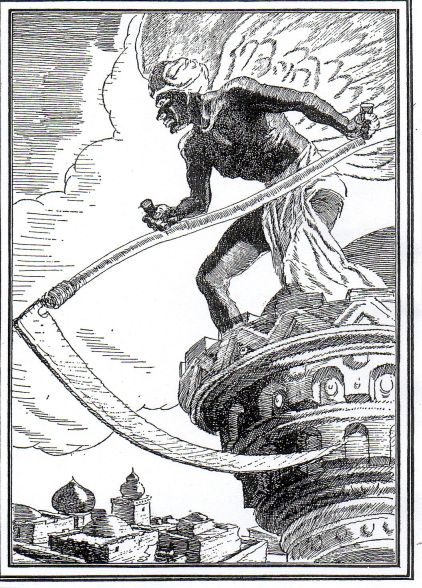 1: apparently, those guys may actually be translating different verses, since they cite different pages of the original manuscript. Now we'll never know ¯\_(ツ)_/¯

18
What are the “old euphemisms” in The Great Gatsby?
8
Was FitzGerald the first to collect the poems of the Rubaiyat together?
6
The meaning of the line “and from your lips she drew the Hallelujah” in “Hallelujah”
11
What does “kettle at the heel” mean in this Yeats poem, “The Tower”?
2
What does “the master's body” mean here?
3
Context and meaning of “in the Lady Bracknell understanding of the word”
1
What does “the morning when the darkness would be gone” mean in this context?
7
The grammatical function of “Nor” without “Neither” or “Not” in poetry