Do the *books* show that Hogwarts is in Scotland?

It's well known among Harry Potter nerds that Hogwarts School of Witchcraft and Wizardry is located in Scotland. But the only sources I've found for this are extratextual, e.g. from interviews with the author or from the Pottermore website. These are commonly considered to be "canon" among the Potter-fan community, but (as someone rather sceptical both about this particular author's extratextual assertions about her universe and about the true authors of writing on Pottermore) I'm interested in evidence from the 7 main books alone.

Is there enough evidence in the books to conclude that Hogwarts is in Scotland? I'm pretty sure it's never explicitly stated, but maybe there's some other evidence pointing to this conclusion.

j-k-rowling harry-potter setting
Share
Improve this question
asked May 1, 2019 at 17:27

"Scotland" is only mentioned once in the series, and that is as a Quidditch team in Chapter Five of Goblet of Fire:

And Wales lost to Uganda, and Scotland was slaughtered by Luxembourg."

In Chapter Sixteen of Deathly Hallows there is a mention of Harry and Hermione camping in a Scottish loch, but not in any relation to Hogwarts's location:

They did not dare remain in any area too long, so rather than staying in the south of England, where a hard ground frost was the worst of their worries, they continued to meander up and down the country, braving a mountainside, where sleet pounded the tent; a wide, flat marsh, where the tent was flooded with chill water; and a tiny island in the middle of a Scottish loch, where snow half buried the tent in the night.

However, it is certainly reasonable that Hogwarts is in Scotland. We know that the Hogwarts Express leaves from London at 11:00, and when they arrive at Hogwarts they have a feast and go to sleep. Indeed, when they arrive it is already described as night. For instance, in Chapter Six of Philosopher's Stone:

This means that the train ride is probably something like nine or ten hours long, as night begins quite late on the first day of September.

The direction of the journey is also described in several places as being northward. For instance, in Chapter Five of Chamber of Secrets:

The Hogwarts Express was streaking along below them like a scarlet snake.

"Due north," said Ron, checking the compass on the dashboard.

They made regular checks on the train as they flew farther and farther north, each dip beneath the clouds showing them a different view.

Depending on where in Scotland, the distance could be something like 400-600 miles (in a relatively straight line). This could be consistent with the train journey described above.

Additionally, Hogwarts is consistently described as being among mountains. For instance, in Chapter Nineteen of Order of the Phoenix:

the mountains around Hogwarts became snowcapped,

This would be perfectly consistent with a location in Scotland, which is, according to Wikipedia, the most mountainous part of the United Kingdom:

Scotland is the most mountainous country in the United Kingdom.

However, from the way Hermione describes Durmstrang in Chapter Eleven of Goblet of Fire, we can perhaps infer that Hogwarts is not quite so far north:

"But I think Durmstrang must be somewhere in the far north," said Hermione thoughtfully. "Somewhere very cold, because they've got fur capes as part of their uniforms."

In other words, Durmstrang is probably significantly more north than Hogwarts is. If so, then in order for Hogwarts to be in Scotland, the potential countries where Durmstrang could be would have to be pretty limited.

So in conclusion, while we are never directly told that Hogwarts is in Scotland there doesn't seem to be much information that would contradict such a possibility, and, indeed, judging by the Hogwarts Express's journey Scotland would seem to be the most likely location. As you can see on the map below, when you travel far enough north from London there is nowhere else to go besides Scotland: 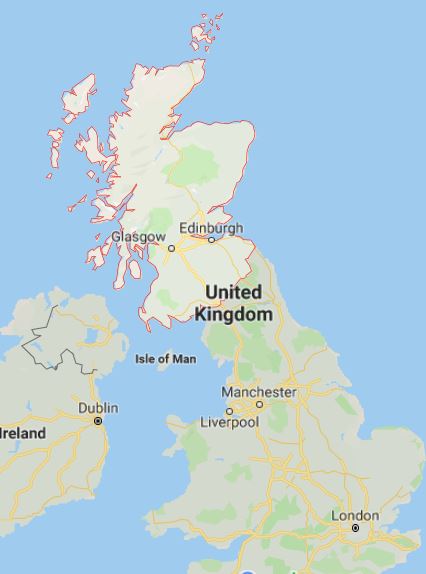 This is also abundantly clear from Fantastic Beasts and Where to Find Them which was published in 2001 while there were still three books remaining in the series (so I don't know how "extratextual" you consider it). In the first entry in the book (Acromantula) there is the following statement:

Rumours that a colony of Acromantula has been established in Scotland are unconfirmed.

This would seem to be a reference to the Acromantula colony on the Hogwarts grounds. Indeed, in the first edition of the book which contains notes from Harry and friends, the word "unconfirmed" is crossed out and replaced with:

Thus, it is clear from there that Hogwarts is in Scotland.

Alex has presented a lot of quantitative evidence in his answer, but perhaps the most conclusive piece of evidence is a throwaway line in the second book:

‘You were seen,’ [Snape] hissed, showing them the headline: FLYING FORD ANGLIA MYSTIFIES MUGGLES. He began to read aloud. ‘“Two Muggles in London, convinced they saw an old car flying over the Post Office tower … at noon in Norfolk, Mrs Hetty Bayliss, while hanging out her washing … Mr Angus Fleet, of Peebles, reported to police” … six or seven Muggles in all. I believe your father works in the Misuse of Muggle Artefacts Office?’ he said, looking up at Ron and smiling still more nastily. ‘Dear, dear … his own son …’

-- HP and the Chamber of Secrets (extract available on Pottermore)

The important word here is Peebles, a town in Scotland. If any route from London to Hogwarts passes near Peebles, then Hogwarts is almost certainly in Scotland.

As Spagirl points out, there is a small logical possibility that Hogwarts is in the far north of England and the car just circled over the far south of Scotland before finding the right area to land in ... but in practice, the authorial choice of mentioning a town in Scotland seems likely to indicate that the final destination is also in Scotland.

Not the answer you're looking for? Browse other questions tagged j-k-rowling harry-potter setting or ask your own question.

13
Is there any textual evidence that this death in Deathly Hallows symbolized the end of childhood?
13
Is there any evidence that this character in Harry Potter was a double agent all along, prior to the revelation?
13
Are the inconsistencies in Harry Potter symbolic or allegorical?
5
JKR says that Hermione shouldn't have married Ron. Is this correct?
5
In the chapter 'Xenophilius Lovegood', why did the Death Eaters use broomsticks and not Apparition?
5
What is the radical feminist take on Harry Potter?
4
Why can't Harry Potter see the threstrals in the books before the fifth?
2
The problem of Percy’s presence