Are hexagons directly connected to each other?

In The Library of Babel by Jorge Luis Borges, the speaker describes hallways in between the hexagonal rooms as,

One of the free sides leads to a narrow hallway which opens onto another gallery, identical to the first and to all the rest.

So, he describes them as being narrow, but he does not describe them as small. However, the only English-language interpretation, I can find analyzing the organization of the hallways, assumes that the hexagonal rooms connect directly and therefore uses this to restrict the number of possible organizations. Also, the text never states that the hallway is straight, does not branch off, and is between only two rooms.

Does the original Spanish get more specific?

From a strictly geometrical perspective, any side of a hexagon can only connect to another single hexagon: 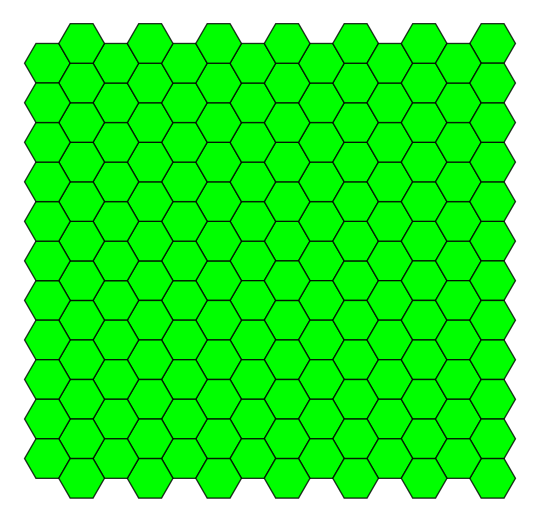 Tiling patterns have a very ancient history, and Borges was no doubt drawing on this.

The point of hexagons is that they pack perfectly, with no spaces in between.

I suspect Borges was drawing on the history of honeycomb patterns (although the "honeycomb conjecture" wasn't proven until 1999), and was potentially thinking of the Beehive tombs of antiquity.

My guess would be that the walls between hexagons are thick, which produce the hallways, but that Borges was intending that the structure itself was perfectly packed, with no space between rooms but the hallways.

Babel was published in 1941, when Penrose was only 10 years old, so the story predates the exciting, recent work in tiling patterns. The game Hex likewise doesn't appear until somewhere in the 1940's, but after its creation, a very large number of modern strategy games adopted this pattern.

It never hurts to look at the Spanish, but Borges seems to write in a way that allows very faithful translation between English and Spanish. (His work tends to do well when translated by algorithms, in my experience;)

Although it is possible to connect 3 rooms by creating a hallway through a vertex, this would disrupt the hexagonal shape, and render it an irregular, 7-sided polygon.

Not the answer you're looking for? Browse other questions tagged short-stories jorge-luis-borges spanish-literature or ask your own question.